Why do anything at all?

This blog post is a collection of videos and images that I have collected over time that speak to the pointlessness of trying to find an answer to this question and how one question, even if answered, leads to many more. This is the kind of stuff that brings together Feynman, xkcd, Louis CK, and some brilliant animation all on one page. Enjoy.

Lets start with a short animated film called “The Missing Scarf.” Soham saw it during his freshman year (as a part of a class on writing) and shared it with me. It is an amazing piece of work, beautiful but ultimately nihilistic (and though there is a squirrel, there is little joy at the end).

Next up is Richard Feynman, in his own inimitable way demonstrating just how down a rabbit hole we go as we start asking why. He begins by starting to explain magnetism, and then the fun begins.

And there are three different riffs, on the same idea by Louis CK. The first is from his show Lucky Louie:

The next the same idea this time as part of his standup act – so the language much more raw, but the overall effect a lot funnier. 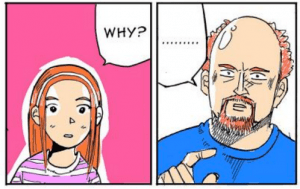 Finally, for his writing class (the same class where he saw the “Missing Scarf” video) Soham had the choice of either writing a paper or making a video. He chose to make a video. Here is his take on THE question: why do anything at all? Enjoy.