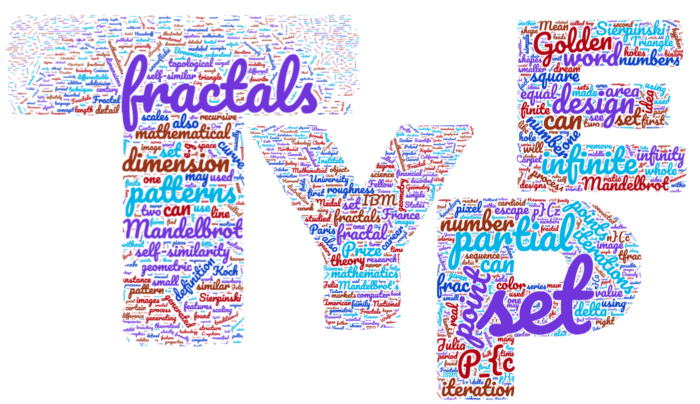 This page is my response to a competition by Ambigram magazine on the topic of Fractals.  I had done some work in this area previously a part of a series of articles I had co-authored with Gaurav Bhatnagar on Mathematics & Visual Wordplay.That said most of the designs below are new, created just for this competition—and I have indicated as such in the description. (Links to these articles and other other ambigram work I have done can be found at the bottom of this page). On we go…

At the heart of a fractal is the idea of infinite regress, also the title of the design below, a visual pun as well as a chain ambigram.

The iconic image or video of fractals consists of a continuous zoom and the image repeats itself irrespective of how much you zoom in or out. Of course, for an ambigram-artist the word zoom has interesting connotations, as shown in this animation.

Zooming Zoom: An animation representing the idea of “zoom.” (Previously created design but a new animation.)

Finite Infinity: Is this the word “finite” repeating infinitely or the word “infinite” doing the same. (Previously created design but new animation.)

Infinite zooms: Same design as above – but with a twist! Once again this  design can be read both as as the “finite” (or the word “infinite”) repeating itself over and over again.  (Previously created design but new animation.)

Seeing these designs can sometimes make it appear as if the world is spiraling out of control – leading to the next design.

Spiraling out of control: This design for “spirals” – is both an rotational ambigram AND a fractal, which means it can be read even when the word is upside during the animation. (Previously created design but a new animation.)

The idea of the word spiraling out of control can be someone’s idea of a bad dream.The Argentinian author, Jorge Luis Borges, often wrote about his fear of infinity—the idea that space and/or time could continue forever. He described this fear in the form of a dream within a dream within a dream ad infinitum. As he wrote:

You have wakened not out of sleep, but into a prior dream, and that dream lies within another, and so on, to infinity, which is the number of grains of sand. The path that you are to take is endless, and you will die before you have truly awakened — Jorge Luis Borges

This led to the next design, a fractal ambigram for the word “Dream.”

So we are now in the strange world of the fractal – geometrical shapes that exhibit invariance under scaling. In other words, a piece of the whole, if enlarged, has the same geometrical features as the entire object itself.

So can we make a fractal ambigram of the word “fractal?”

Fractal Fractal Ambigram I: The title says it all. (Previously created design but a new animation.)

Fractal Fractal Ambigram III: Same as the design above but now with a zoom out AND a twist. (New design and animation.)

The idea of fractals was popularized by the mathematician Benoit B. Mandelbrot in his book, The Fractal Geometry of Nature. So Mandelbrot was an obvious one to play with.

Zooming on to Mandelbrot: A fractal design for the name “Mandelbrot.” (New design and animation.)

Benoit B Mandelbrot was once asked what the “B” in his name stood for and he is said to have replied “Benoit B Maldelbrot” i.e. in other words his name was a fractal! The next design pays homage to this idea. 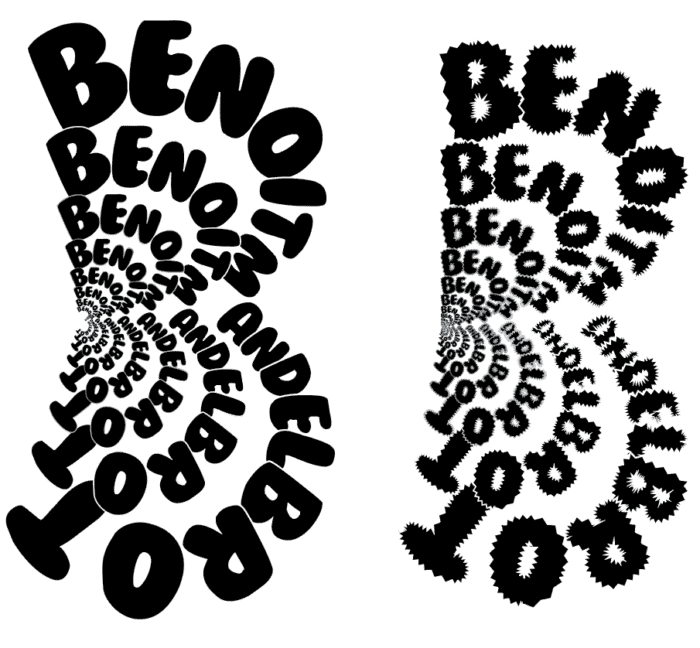 To Be (Mandelbrot) or not to B: Two designs for
Benoit B(enoit B(enoit B(enoit….))) Mandelbrot. The second design seeks to capture the idea that fractals can be used to model “rough” surfaces such as mountains and coastlines. (Previously created designs.)

Mandelbrot’s ideas took root in the popular culture—in the matrix of our daily lives, as it were. Here are two designs for the word “Matrix” as fractals.

Matrix zoom Too: Zooming into the matrix. (New design and animation.)

The complexity of the Matrix zoom Too can be appreciated only by seeing the entire still image. Click on the image to see larger version! 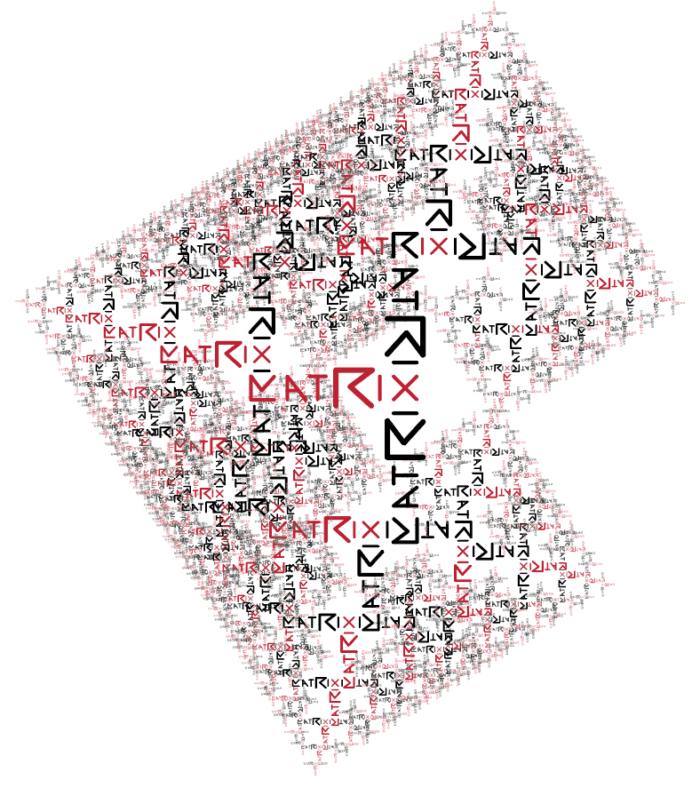 Fractals are not just seen in nature but they can be created, usually on a computer, by an iterative process, where the result of a mathematical equation is “fed back” into the equation itself. The next design for the word “iterate” seeks to capture this idea.

Iterate on and on and on: A fractal design for the word “iterate.” What is cool about this design is the manner in which the “ITE” at the start of the word becomes the “E” and part of the “ITE” of the next iteration of iterate! (New design and animation.)

This process of iteration leads to the idea of invariance—the fact that things look the same when scaled (up or down).

Unchanging variance: A fractal design for the word “invariance” that stays invariant upon scaling. (New design and animation.)

Another word that we often use to describe invariance is “similarity.” The idea of similarity also is key to understanding Mandelbrot’s deep insight— that in some powerful way, the folds of alveoli in our lungs are similar to the ruggedness of a coastline which are similar to the tree-like structure of broccoli.

Similar all the way down: The fractal structure of similarity. (New design and animation.)

The phrase that may be a better descriptor of fractals, than similarity, is actually “self-similarity.” In other words, a self-similar image contains copies of itself at smaller (or larger) scales.

The self is similar: The deeper you go the more self-similar it gets. (New design and animation.)

There is a beauty in this idea of fractals. Mandelbrot himself summarized it as “beautiful, damn hard, increasingly useful. That’s fractals.” What Mandelbrot had discovered was something profound, emergent and surprising. It touched something deep within us. It informed us that beauty is complex, and yet all around us, in atoms and in galaxies, in splashes of water and in ragged coastlines. Beauty!

And speaking of beauty, in some way it emerges from randomness, which is the word under consideration below: Random

And with this, we end this tour of fractals and ambigrams by coming back full circle (as we must)—to a chain ambigram mapped on to the infinity symbol—but this time for the word “self-similarity.”

LINKS
You can access all the articles that Gaurav and I have published in one single PDF  here or read them as an embeddable document. More of my ambigram work can be found on my page on Mathematics & Visual Wordplay.

All images on this site are © Punya Mishra @punyamishra