Political debates are heavily analyzed – by pundits and laypeople alike. I had my own minor visual contribution to this discourse through this WordMap/Cloud of the third and final debate between McCain and Obama . Such wordmaps are fun to create and see but are not terribly insightful. Yes you can see that Obama used the word “see” more often than McCain but how far does that really take you in terms of interpreting and making sense of the campaign. And then comes this!

Check out the amazing Lexical Analysis of 2008 US Presidential and Vice-Presidential Debates.

Metrics of speech structure of candidates fall within narrow tolerances, suggesting high degree of wordsmithing and rehearsal. For example, noun/verb/adjective/adverb ratio spread is very small with candidates’ values within 2%. Relatively small differences seen in unique word count and noun phrase profile. The Obama/McCain debates began with balanced performance from both candidates but end with Obama verbally overpowering McCain and delivering speech with more concepts and higher complexity. When words exclusive to a candidate are considered, Obama’s more frequent use of verbs and much more frequent use of adjectives and adverbs, compared to McCain, suggests that he is more of a fluid and contextual thinker who, unlike McCain whose language metrics suggest a categorical approach, does not seek to fit issues into pre-existing categories. Obama’s greater use of modifiers suggest an outlook that is more open to nuance and inter-relatedness of events and issues.

This is one of the most amazing uses of data analysis and representation I have seen. I started out thinking (just as I had about my Worldes) that this was over-doing it, but then by the end I was impressed. In particular the diagram that showed me that this kind of analysis was valuable was the analysis of what was and wasn’t said, in particular the word-clouds of nouns and verbs. Check out these two images: 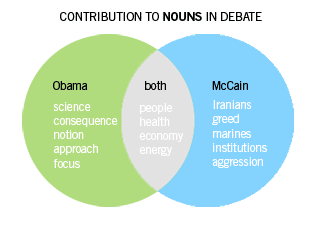 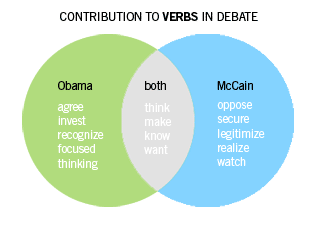 Like I said, amazing! Check out the complete article Lexical Analysis of 2008 US Presidential and Vice-Presidential
Debates