Ambigram.com is a website about ambigrams and the people who make them. Lots of cool stuff for enthusiasts and novices alike. They often conduct competitions and other fun challenges for readers. One recent one was related to palindromes. In brief, they challenged people to create palindromic ambigrams. This is something I had tried a few time a long time ago – but their challenge pushed me to go back and come up with some solutions.

Well, I ended up with more than I had anticipated. I now have a technique, using which, anybody can create a palindromic ambigram of any length! How cool is that.

What is a palindromic ambigram you ask? A palindrogram? An Ambidrome? People often confuse between palindromes and ambigrams. Both are forms of wordplay that depend on symmetry. Both have to do with writing words such that they can be read in multiple ways. But that’s where the similarity ends. Palindromes are words, phrases or sentences that can be read forwards or backwards, (“No x in Nixon” or “Madam I’m Adam” being two famous examples). Ambigrams are a kind of visual pun, where the shapes of the letters can be interpreted in two or more ways.

A good way of thinking of the difference between the two is by looking at a few examples (or non-examples). Consider the word “palindromes.” As it turns out, the word “palindromes” is NOT a palindrome. Reading it backwards actually gets you a somewhat unpronounceable “semordnilap.” (Just as a aside, “semordnilap,” unpronunceble though it maybe, turns out to be a neologism that stands for words that can be read as two different words, backwards and forwards. This is in contrast to palindromes that read the same when read backwards or forwards. The word “dog” which reads “god” backward is a  semordnilap!)

However most palindromes (and semordnilaps) are not ambigrams. Ambigrams, are words that can be read in multiple ways – rotated, reflected etc. Here is an ambigram for the word ambigram. It reads the same when rotated 180 degrees.

Here is a reflection ambigram, this time for the word “ambigrams.” This reads the same even when reflected in a mirror.

Note that the words ambigram (or ambigrams) are not palindromes. Neither are they ambigrams when not written in a special kind of way. So the way “ambigram” is written in this sentence is not readable when rotated 180 degrees. We had mentioned that the word “palindromes” was not a palindrome. But can it be an ambigram. Here is what it looks like when rotated by 180 degrees. Not very interesting is it?

Now look at this image below:

With some visual manipulation, we now have the word “Palindromes” written in a manner such that it reads the same, right side up, or rotated 180 degrees. We now have a ambigram of the word palindromes.

There have been some attempts to combine the two, i.e. create words that read the same backwards and forward AND are symmetric in terms of rotation (or reflection), and this is the crux of the latest challenge on ambigram.com. They want to know if one can create a design that is both an ambigram AND a palindrome. Here is what they say:

You get the idea… Nothing but ambigrams and palindromes.

They worked on it and as they themselves say, they “set the bar pretty high right out of the gate.” They created a palindromic ambigram where,

Both the upright and inverse phrases are palindromes that can be read forward and backward, and the entire ambigram rotates to become the opposite phrase.

Here is their solution.

Which reads, “Live Not On Evil” one way and “Dogma I Am God” when rotated 180 degrees! Pretty cool.

I have previously tried creating ambigrammic palindromes (or palindromic ambigrams), with modest success. The easy ones are words like Anna.

The recent challenge pushed me to try some more, and in that process I have discovered a trick that will allow you to make any word into a palindromic ambigram. That’s right, any word, phrase or sentence, however long the sentence may be. To give due credit, this trick builds on something I had read many years ago in Douglas Hofstadter’s collection of essays he had written for Scientific American.

The trick Hofstadter wrote about was not about ambigrams but rather about creating palindromes of any length. The heart of the trick is the palindromic statement “sides reversed is.” Once you notice that this is a palindrome it is easy to create a palindrome of any length. All you have to do is write out the word, phrase, or sentence, follow it by “sides reversed is” and then repeat the word, phrase, sentence in reverse order. And lo, you have a fully functioning palindrome.

As an example consider this palindrome:

Now we could replace the word “Power” with a statement of any length and we have a recipe for creating a palindrome. So we could say:

With this trick in mind, I decided to take it to the next level. I reasoned that if I could create an ambigram for “sides reversed is” I could, theoretically create ambigrams of any length that were also palindromes. Here is my solution to creating an ambigram for “sides reversed is.” (I use two different colors just to distinguish the words, they are not really needed!)

This palindromic ambigram is key. Once we have this, we can create ambigrams of any length whatsoever by sandwiching these words between two ambigrams. Let us first go with the somethat natural palindrome “No X in Nixon” and convert it into a palindromic ambigram. Check it out below. It reads “NO X IN NIXON sides reversed is NO X IN NIXON.” While this design may not win awards for clarity of expression, or for even its truth-value, it is something that can be read backwards and forwards AND even when rotated 180 degrees! How cool is that. 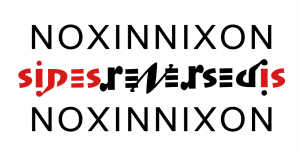 Here is another one, this time stating “heaven on earth sides reversed is heaven on earth.” Again not earth-shattering in its insight but a cool design all the same. 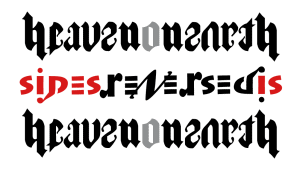 Of course once we have done the heavy lifting (i.e. designed the ambigramic version of the palindromic sentence fragment “sides reversed is”) there is no reason to even sandwich it between ambigrams. So here is an example of how once we have the ambigram for “sides reversed is” all we have to do is sandwich this design between two sets of sentences. The first written the right way and the other rotating it 180 degrees.

Or this (the same as the above but a little more stylistic!)

So there you have it, a technique for creating infinitely long ambigramic palindromes!! Enjoy :-)