Unpacking McLuhan’s “The medium is the message” (1/3) 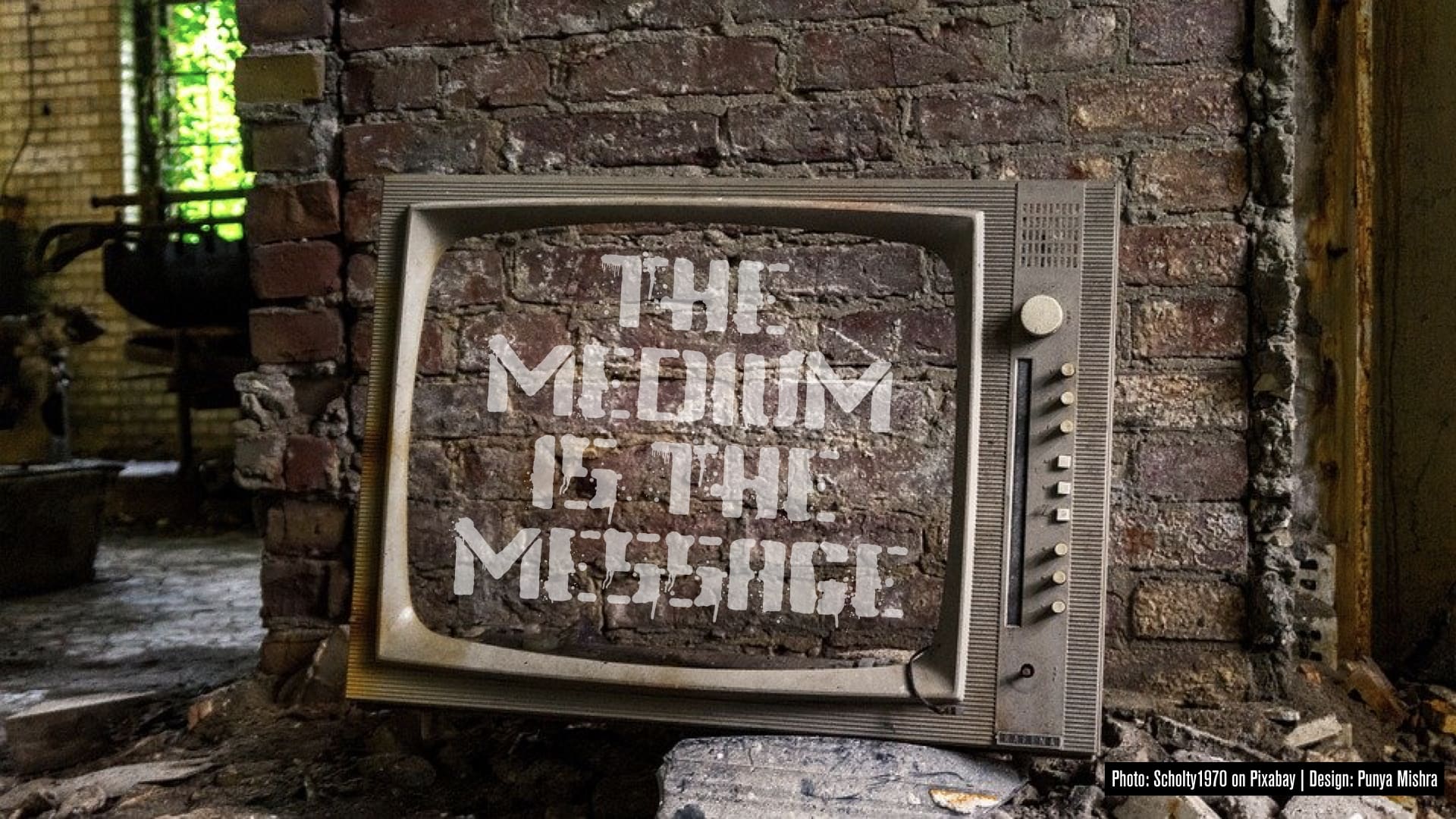 This is the first of a series of blog posts about how media influence our thinking. This, the first post, uses the invention of writing and print to unpack the meaning of McLuhan’s statement, “The medium is the message.” The second post, focuses on a story by Ted Chiang that takes these academic ideas about the psychological and social implications of the advent of a new technology and frames them within two human narratives and in that process goes deeper into than any academic article ever could. The third post builds on a piece written by Neil Postman over 30 years ago and shows how the questions and issues it raises are still relevant for us today. Two additional posts followed: Four and five

The medium is the message: Unpacking McLuhan

One of the greatest myths about media is that they are neutral, i.e. they are mere “pipes” or “conduits” by which information is passed from one individual to one or more people.

The truth of the matter is that technologies are NOT neutral with regard to its effects on individual and social cognition. Different technologies (or media) engender different mind-sets or ways of thinking these characteristics are inherent in the nature of the media itself and, thus, often invisible to the users of these media. As McLuhan famously said “The Medium IS the Message.”

I was reminded of this by reading a recent column by Ezra Klein titled: I didn’t really want it to be true, but the medium really is the message. (This topic was also covered in a recent episode of his podcast). In this post I want to expand on this issue a bit by looking specifically at the advent of the technology of writing and print.

The effects of particular technologies on cognition, knowledge, and society at large are often quite subtle and complexly woven.  Strict cause-effect relationships may not be apparent.  Moreover, these effects are often not immediately appreciated but, rather, show their influence on far longer time scales–decades or maybe even hundreds of years.

A fruitful way of thinking about the manner in which media influence cognition is that different media prefigure cognitive processes and the development of cognitive structures in different ways. In its original usage in the theory of history, as described by Hayden White, a “prefigurative scheme” meant a set of implicit cognitive biases that determine the “ground rules,” so to speak, of cognitive processing and analysis (e.g., what kinds of data are important, how they should be evaluated, how arguments should be structured, and so on).  White’s idea of prefiguration was that it is precognitive and precritical.  He argued that prefiguration not only helped delimit the borders of a domain, but also helped determine how concepts will be used to identify the objects in the domain and the nature of the relationships between those objects.  The important point, again, is that quite often these prefigurative schemes are invisible to the people employing them, but still affect their thinking in essential ways (much like the way the lenses of eyeglasses affect vision without their long-time users being aware at most times that they are looking through them).

An ancient argument of this kind can be found in Plato’s dialogue, Phaedrus, in which Socrates (actually Plato speaking through Socrates) makes the argument that writing (and books) would destroy thought.  The crux of the argument is that books merely make statements; they do not argue back.  Socrates claimed that this passivity would undermine reflective thought–the ability to think deeply about things, to question and examine every assertion.  The crucial concern for Socrates was not what people would write but, rather, the effects of the print medium, itself, on the fundamental nature of thinking.

The technology of writing (and print that followed it) changed our view of the world.  Writing today is so ubiquitous, so much a part of our world, that it is difficult, if not impossible, to imagine a solely oral culture or even to think of writing as a technology.  Knowledge in oral cultures would be more fluid; it could change with every retelling.

Looking specifically at the invention of the printing press—arguably one of the most significant technological advances of human cultural evolution. It allowed for mass literacy, and in some ways, it can be argued that, our educational system is built around the “book.” The “book” and the ability it provided to inscribe and share ideas in a concrete form is what led to the renaissance, the reformation, the scientific revolution. By democratizing access to information and knowledge, the book, challenged authority, and popularized ideas such as “all men [sic] are created equal,’ or “man [sic] is born free, but he is everywhere in chains” leading to transformative social change, the impact of which we feel even today.

Most of the significant effects of the invention and spread of print can be traced to certain specific properties of print media:  in particular, print created objects that were mobile, immutable, presentable, and readable; and these properties led to fundamental changes in how we think, both individually and collectively. These properties ensured (or seemed to ensure) that discussions could be carried beyond the conversational arena, that ideas could be transported without change in their essential nature, and that they could be universally and consistently understood (at least by those who knew the conventions) in a way that more mutable, “unreliable” oral retellings could not.

A few of the consequences of this transference of properties from the medium to the message were that it solidified the notion of ownership of ideas and the convention that arguments could be settled by invoking the appropriate text, that ideas could be “owned” and more. This is of course in sharp contrast to an oral culture, where meanings were deeply connected to speech, with no external arbitrator or authority. Thus, print, by its very nature, prefigured the manner in which discourse could be, and was, structured. In one my early papers (Mishra, Spiro & Feltovich, 1996) we wrote the following:

Most of the significant effects of the invention and spread of print can be traced to certain specific properties of print media: In particular, print created objects that were mobile, immutable, presentable, and readable; and these properties led to fundamental changes in human cognition (Latour, 1990). These properties ensure (or seemed to ensure) that discussions could be carried beyond the conversational arena, that ideas could be transported without change in their essential nature, and that they could be universally and consistently understood (at least by those who knew the conventions) in a way that more mutable, “unreliable” oral re-tellings could not. The crucial argument here is that initially it was the medium, this new fixed object, that was immutable. Then the idea of immutability passed on from the medium to the message, with attendant implications of accuracy, fixedness, and truthfulness. (p. 289)

But the impact of print technologies is more complex and greater reaching than even that—in ways big and small. As Steven Johnson has argued, one of the unintended consequences of the invention of printing was that many people realized they had poor eyesight. That had not previously been an issue because masses of people had not needed to peer at small print on a page by candlelight. Within decades after the invention of the printing press, lens makers were making spectacles and it became a booming business across Europe. A side effect of this growth of interest in glass and its refractory properties led innovators to play and experiment with them and discover new and alternative uses for lenses. And it was that undirected play, with pieces of polished glass, that led to the invention of the microscope and the telescope. With those new innovations, suddenly the infinities of the very small and the very large became revealed to us and transformed how we looked at the world and our place in it.

Today, the advent of the Internet, and social media, we are seeing the next round of how changes in media impact how we think, work and socialize. In many ways the culture of social media is more akin to an oral culture than one solely based on print. We can see the relative unraveling of the ways of thinking and being that were based on a print culture as we move into a social media dominated world.

In my next post, I focus on a story by Ted Chiang that captures how new technologies and media change not just how we think but also how we feel.