A design for the word “illusions” inspired by a design by Scott Kim.

I have been obsessed with optical illusions for for a long time. This interest has played out in many ways: from the hundreds of ambigrams I have created to the new year’s videos we create as a family. In this post I want to share, what I believe is an original optical illusion, something I have never seen before in my years of playing with such objects.

But first, some context.

Optical illusions come in a variety of types. Two types that I am love are ambiguous figures and visual paradoxes/impossible figures.

Ambiguous figures are images that can be interpreted in more than one way. The “face-vase” illusion or the “duck-rabbit” illusion are famous examples of such illusions. These illusions usually have two alternative and competing interpretations—and the mind oscillates/flits back and forth between them unable to settle on one. Also, it is difficult, if not impossible, to see both these interpretations at the same time. We see one, or the other, never both together. 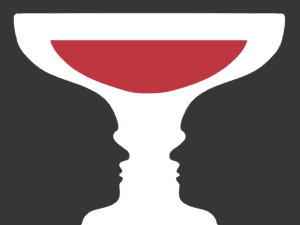 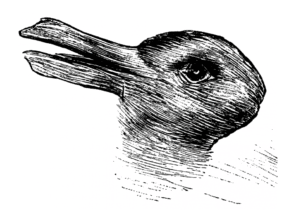 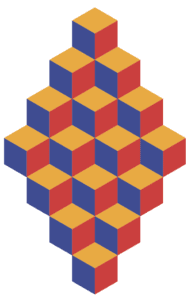 Three examples of ambiguous illusions, do you see “two faces or a vase,” “a duck or a rabbit,” and finally, do you see a bunch of cubes with the yellow shape is at the top or at the bottom?

Visual paradoxes / Impossible figures are images that look like real objects that can never exist in the real world. M.C. Escher created some of the most iconic of such images – the unending staircase and waterfall being great examples. There are many other examples, some of which are represented below. 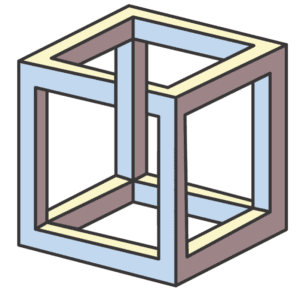 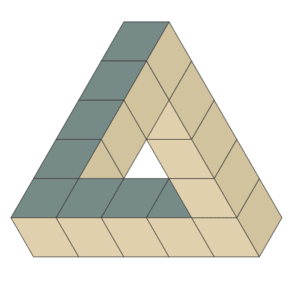 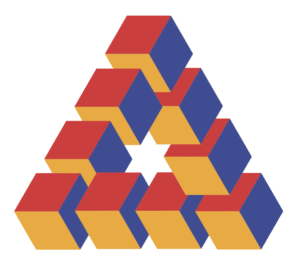 So with this we come to my key discovery/invention—an optical illusion that is both an ambiguous figure AND a visual paradox, i.e. an image flips between two interpretations that are cannot exist in the real world.

Here it is…  spend a moment on it. What do you see? Try focusing on the white “stars” at on the left and on the right? What changes? What happens if you focus on the blue shapes? 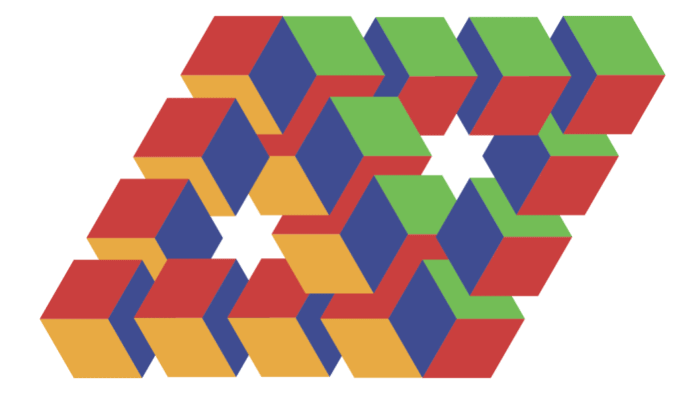 What we have is essentially a combination of 2 different impossible triangles. Can you see each of them? Can you see both at the same time? (Note: If you have difficulty seeing the triangles, focusing on the “star-shaped” pattern may help.)

The images below, and the animated gif should be self-explanatory – demonstrating the two independent interpretations of the image.