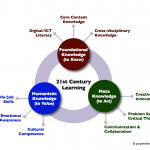 Back in 2013 we proposed a framework for 21st century learning based on a synthesis of a range of reports, books, and articles (Kereluik, Mishra, Fahnoe & Terry, 2013 & diagram above). That article however was relatively abstract and what was unclear was whether this framework was consistent with what educator really think. This article provides the results of a survey on what educators think about 21st century learning. The results are thought-provoking—and we argue in some senses deeply misguided. We identify are three key myths about 21st century learning and suggest that these emerge as a consequence of an unreflective emphasis on the power of technology to access information as well as a fundamental misunderstanding of the very nature of learning and the broader goals and purposes of education. Complete reference, pdf of article and abstract below.

Abstract: Twenty-first-century learning and how it differs from prior conceptions of learning have received significant attention lately. Kereluik, Mishra, Fahnoe, and Terry (2013) offered a synthesis of multiple expert frame- works and perspectives on 21st century learning, summarizing them in nine forms of knowledge (under three broad categories: foundational, humanistic, and meta). Using this framework, in this study, 518 practicing educators completed a survey on their beliefs about 21st-century learning, allowing us to compare practitioners’ perspectives to that of the experts. Our analyses indicate that, in contrast to the expert view as Kereluik et al. synthesized, which equally valued all the categories, survey participants ranked creativity, collaboration, communication, and critical thinking (meta-knowledge) and digital/information and communication technology (ICT) literacy (one component of foundational knowledge) as being most important. Life/job skills, ethical/ emotional awareness, and cultural competence (humanistic knowledge) were ranked lower, while disciplinary and cross-disciplinary knowledge (two components of foundational knowledge) were regarded as being least important. Though these results are consistent with some popular views about 21st-century learning, we argue that this reduced emphasis on foundational and humanistic knowledge is misguided. It is, we suggest, the consequence of an unreflective emphasis on the power of technology to access information and a fundamental misunderstanding of the very nature of learning and the broader goals and purposes of education. Finally, we highlight three myths about learning in the 21st century and offer recommendations to address these myths.