I spent the past seven days in Chile, six days in Santiago and one in Valpariso. It was absolutely wonderful. My trip was sponsored by the Faculty of Education at the Pontificia Universidad Catolica de Chile (PUC is one of the nation’s premier universities), as well as support from the Enlaces project of the Ministry of Education and UNESCO.  This trip builds on a memorandum of understanding recently signed between MSU and PUC and focused on the role of ICT in education.

A lot happened during the week – here is my attempt to capture some of the highlights.

I had some great meetings with faculty, staff, staff at the ministry around issues related to teacher education and technology integration. I gave two talks in Santiago – the first at the university and the other a much larger public-talk which was attended by over 500 people (200 of which had to watch it on close circuit TV since the hall was full). The talk was streamed live and I was told that another 200 people watched my presentation in that manner! This may easily be the largest group I have ever spoken to.

More interestingly all my slides in this talk were in Spanish! This turned out to be a major operation and would not have been possible without the help of Mary-Ann Isaacs and professor Ignacio Jara who meticulously translated each and every slide (there were over 270!) for me. Also at hand were two interpreters who had to deal with my rapid-fire style of presentation and my other idiosyncratic behaviors. A super major thanks to Gloria Morrison and Loreta Bernucci, they were calm, funny and just so good.

One of the most amazing things that happened during my trip brought home to me just how much the world around us changed because of technology. I had been told that the view of Santiago from the top of the San Cristobal mountain was something that should not be missed, so one evening, I took a taxi from the hotel to go there. As it so happened the taxi driver, Pablo, spoke no English, and I of course know no Spanish. What Pablo did next was amazing. He used his cell-phone to translate, live, between Spanish and English. Here is a video. As you can see the translation is not perfect (and the signal dropped once in a while) but overall it worked! Turns out when I talked to Pablo at a later date, this time with Pedro there to conduct the actual translation, I found out that Pablo is a poet and musician, with his own website, check it out: http://www.paulotiltil.com/. Here’s a short video of the computer-mediated interaction between the two of us.

First out, I would be remiss if I did not thank the dean of the Faculty of Education, Dr. Cristian Cox and my local host Dr. Pedro Hepp. My idea of my coming to Chile was was first brought up over two years ago by Dr. Cox and his persistence is what made it happen. Dr. Hepp was the most gracious host, dealing with good humor and patience with the inevitable problems that arise when one manages a crazy schedule like the one I had. 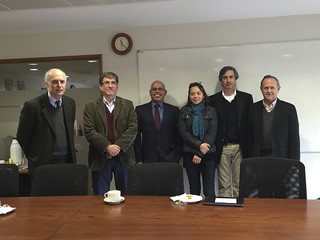 I also got to spend one day at Valpariso at the Universidad de Playa Ancha. I repeated my talk with Spanish slides there as well. Here is a report on my talk there. Here is a photo with faculty members at the University after my talk.

The highlight of the trip was the half-day that I got to go sight-seeing. My excellent guides in this were Sergio Parraguez, Roxana Robolledo and Maria Gabriella, seen below. 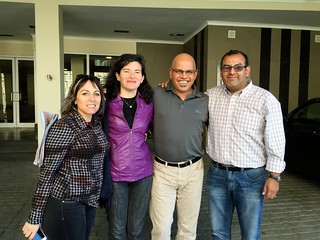 As always I took lots of photographs. Here they are embedded as a slide-show.