It has been a decade of running.

In this decade (technically a decade plus 1) I have run 11 races, averaging one per year – 3 ten-mile races and 8 half-marathons. Not bad for a person who does not consider himself a runner. The photo above is all the participation medals I have collected!

Running does not come easy to me and moreover I am not very good at it. And nor do I take it seriously, as evidenced by my idiosyncratic training schedule, where where family, work and travel (and pretty much everything else) take priority over running.

But over the past decade (plus 1) I have done one thing. I have signed up for the Capital City River Run and I participate. The goal have never been to win medals (not that I was ever in contention for any) and oftentimes the goal is not even to get a PR. The goal is to show up at the start, keep running till I finish.

Clearly despite my lack of talent and seriousness I did manage to run these 11 races. It is important for me to acknowledge the fact that this would not have been possible without a few key individuals, and that these people deserve my thanks, and this, 10 years into the process, is as good a time as any to do so.

First and foremost is Matthew Koehler. Matt, is my partner in crime in most of my scholarship (go TPACK!) but is also the person who made an off-the-cuff suggestion, back in spring/summer 2004, that we participate in the CCRR-10 mile race later that year. You have to understand why this was such a crazy idea, since I had at that time not run further than 2 or 2.5 miles!

He was also the one who offered me a simple training schedule. Take short runs during the week (as many as you can fit in) and then add a mile every weekend. By that logic, starting from scratch, I, or anybody else for that matter, should be able to run a full marathon in 26 weeks. That’s pretty crazy as plans go, but I was too naive to grasp the absurdity of his suggestion and actually followed his instructions, and a couple of months later we ran our first 10 mile race. We followed that up the same year with a half-marathon at Portland, MI. I think I got my best time ever for a half-marathon that day – except I kept no record of it. (Another indication of the lack of seriousness I placed on the entire effort).

And then it became a ritual, sign up for the Capital City River Run, use the summer to train for it and just go do it. Matt joined me for two or three years and then dropped out, but he started the sequence… and for that (and for many other things) I will always be grateful. For instance, here I am from keeping it going in 2009. 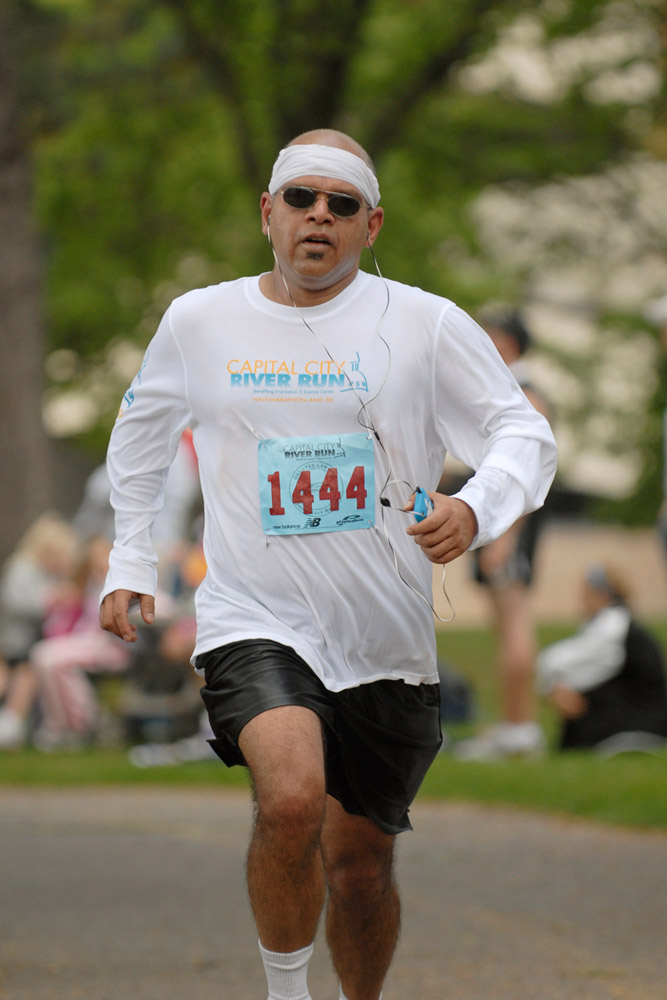 The other person to thank is Balaji. Balaji ran his first race with Matt and me back in 2004 and discovered this was something he was born to do. In a year, he had run is first full marathon and has run numerous full marathons across the country since then. Though I never scaled the heights he has reached (he is in a league of his own), his passion and dedication motivated me to, at the very least, to continue signing up.

I also need to thank two people I don’t know personally, Lisa and Chris. I see them once a year at the race. They run at a steady 10 minute per mile pace, chatting and motivating other runners — and they do all that while dressed up as pirates. Every year I stick with them and, they, more than anybody else are responsible for my keeping a pretty steady performance over the years. Here they are, the first picture is from last year and the second from earlier today. I can’t thank them enough. They are two of the reasons why the Capital City River Run is special!

Finally, I need to thank my two kids, Soham and Shreya, for indirectly motivating me to stick with running. My kids are athletic, participating in range of school sports (soccer, basketball and track for Soham; volleyball, soccer, track and cross-country for Shreya). Through the years, as a parent, I have told them that in sports (and life) it is the effort that counts. As the Gita says, all you have control over is your effort, what you do. The results of our efforts are not guaranteed. That said, the fact that the results are unpredictable should not dissuade you from trying. All this easier said than done. I do hope, however, that my continuing to participate in these races, despite my lack of any ostensible success (apart from finishing), demonstrated to them, in some small measure, that I do practice what I preach. Every year, I showed up and I ran, that’s it! I don’t know if they ever actually got the message, but I know that has been an important part of my motivation.