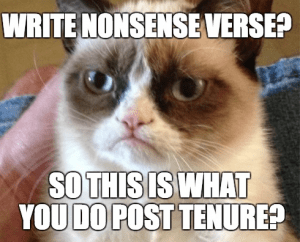 The 5th floor of Erickson Hall is a fun place to be. Typically a bunch of graduate students hang out there, working on their readings, talking shop and in general having a good time. For some reason, last week, I promised Josh Rosenberg that I would write a poem for them. I don’t know why I promised this… I just did. So now that I had said it, it had to be done.

So I wrote a poem building from one my favorite poems of all time, Lewis Carroll’s Jabberwocky. It wasn’t the greatest thing but hey, whatever. I shared the draft with others and asked for suggestions to help make it better. And all hell broke loose. Suggestions came from left and right, via email and conversations in passing. And at each step the poem became richer, more consistent, better connected to the original…

So here is Blabberjocky, on the fifth… a poem that ended up becoming something greater than the sum of the individual contributions. A special shout out to Danah Henriksen, Spencer Greenhalgh, and Andrea Zellner for their help. Since the first version was prompted by an unsolicited promise made to Josh Rosenberg, it is clear that a large part of the blame for this poem being inflicted in the world lies with him.

Blabberjocky on the Fifth?
(with apologies to Lewis Carroll)

Beware of the Twitbook (albeit such fun!)
The gifs atrance’d, for eyes to catch.
Beware the inmail, your ebox not done.
Interwebs? grad work?…there’s no match!

Bereft of words, she took iPad in hand
A coarse paper due, her nerves were fraught
Alight she leapt, by 509 took her stand.
With empty mind, nil, nothing, naught.

And as in blankrupt thought she stood,
A posturing pedagogue shambled in
Bombasted a piffle, as he would
And left. Her time was running thin.

The last hope was candy, a friend left behind
It helped, the rush, The Snickersy snack!
Her Vorpal pen was a sword in her mind
The jargon jungle, she took to hack.

And hast thou slain the writer’s block?
Hail Zotero, a draft! The real McCoy!
“O frabjous day! I beat the clock”
She laughed and carolled in her joy.