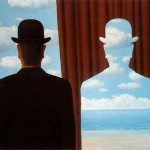 Try as we might to be open-minded the truth is that we all have biases. These biases can be subtle and insidious and it is rare that we get to confront them head on. A recent story that has been making the rounds on  NPR, InsideHigherEd, and The Washington Post about racial and gender bias in higher education, forced me to face this issue, and though, as it turns out, I turned out OK in the end, it did raise some important questions about us academics.

It is a longish story, mainly because I have to provide some context for the study. So bear with me…

In a study titled “What Happens Before? A Field Experiment Exploring How Pay and Representation Differentially Shape Bias on the Pathway into Organizations,” the researchers (Milkman, Akinola, and Chugh) sent identical email messages to 6,500 professors across a range of disciplines in 250 of the top universities in the US. Each message indicated that the “student” was impressed with the professor’s work and requested a meeting. These messages were identical in every respect except in one crucial way: the names of the fictitious students.  These were the names used in the study,

As you can see the only thing that distinguishes them is that they varied along two key dimensions Gender (male v.s. female) and Race (white, Latino/a, black, Indian or Chinese). What the researchers were looking at was how often professors wrote back agreeing to meet with the students. From this they could infer whether the gender/race of the person writing to the faculty member made a difference to the response rates?

The results are sobering, to say the least. As the NPR story says

These differences in response go deep and cut across gender and racial lines. As Milkman says (in the NPR report)

In addition, there were large differences between departments and schools.

In fact when I go and look at the actual data, something more scary and surprising emerged (at least for those of us in education). See Figure 1 (click to see a larger version). 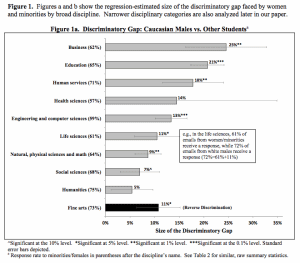 This of course got me to thinking about how I would response if I received an email of this nature. Would I fall in that 21% discrimination gap? I receive emails from prospective students all the time and I TRY to be responsive… but I wondered do I respond differently to people just based on their names?

This was followed by another question? Was I one of the people randomly selected for the study? So I did a search in my email archive, and guess what, back in 2010 I HAD received an email from a Deepak Patel (clearly an Indian male) with exactly the same words as in the emails that had been sent out… and yes (YES!) I had responded. Not just that, but I had responded right away, and cc:d two of my colleagues who were at that time joint-coordinators of our doctoral program to let them know of this potential student.

Here is a screen shot of the message that went out to all the participants in the study (click for a larger view): 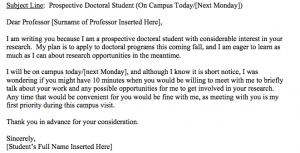 Here is a screen shot of the exchange (with my response and the original email I had received). Click to get a larger view. 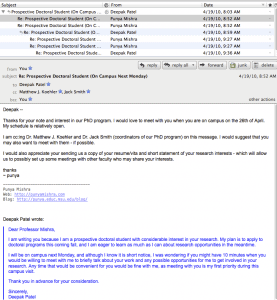 Whew! That was close.

But as my son pointed out, was my response connected to the fact that I was receiving a note from a prospective Indian male student (given that I am an Indian male)? Would I have been as responsive if the gender or race had been different? Hmmm… (I love/hate it when my goal of raising a critical thinker comes bites me on MY backside!).

Though I may not have an answer to my son’s question I do think that this paper points to just how strong (and insidious) some of these biases are and just how far we (as a discipline and profession) still have to go.