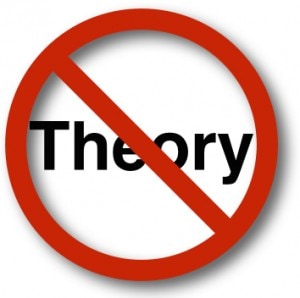 One question that all doctoral students dread (and rightfully so) is “What is your theoretical framework?” Why, they wonder (silently), why do we need a framework?

This question popped up recently in, of all places, Facebook. Pilar Quezzaire, a graduate of our MAET program, posted a question to our overseas FB page as follows:

Busy writing away about technology integration frameworks like TPACK, and I’ve been asked to come up with a few definitive articles about their effectiveness in general (not the effectiveness of a particular framework.) Has anyone come across a source that looks at the difference between integrating tech with a framework in mind, versus integrating technology without one? … I can (cite/list) lots of articles and case studies, but no one seems to have looked at the trend of using frameworks. Thanks!

This was not something I had given much thought to before. Theory is sacrosanct in academia, its the air we breathe so why question it. Reflecting on Pilar’s question prompted me to respond at length (maybe at greater length than she needed or wanted). Interestingly, the discussion moved form citing specific studies into the deeper philosophy of science issues. This is what I wrote (edited lightly to make it work as a blog post):

This is an excellent (meta) question and one that really needs way more space than FB can provide – but let me try… with an analogy. A framework for technology integration for me is akin to the the role that theory plays in science. What a theory does is provide a structure that lets us systematically study the phenomena under question, allows us to make predictions, guides practice and so on. Now have there been any studies that show that having a theory is better than not having one? I doubt it – because the benefits are so obvious. Think of biology before Darwin’s (and Wallace’s) insights and the answer should be obvious.

So there is a reason why it will be difficult to find someone comparing using a framework v.s. no framework. In fact one can even question whether there can be “no framework.” One can of course compare different frameworks (in terms of their simplicity, explanatory power, coherence etc.) but to my mind, any framework, is better than no framework at all

The Mishra & Koehler 2006 article in TCRecord does get into this in some detail, where in a section titled “What does the TPACK framework buy us?” we start with the question “What is the value of a theoretical framework?” and we answer it along three dimensions- description, inference generation and application. And we end the article this way:

We are sensitive to the fact that in a complex, multi-faceted and ill-structured domain such as integration of technology in education there is no single framework that tells the “complete story;” no single framework that can provide all the answers. The TPCK framework is no exception. However, we do believe that any framework, however impoverished, is better than no framework at all. As Charles Darwin said (Darwin & Seward, 1903, p.195): “About thirty years ago there was much talk that geologists ought only to observe and not theorize; and I well remember someone saying that at this rate a man might as well go into a gravel pit and count the pebbles and describe the colors. How odd it is that anyone should not see that all observation must be for or against some view if it is to be of any service!” In proposing the TPCK framework, we have sought to provide one such view.

So to cut a long story short… I doubt you will find studies that compare no frameworks vs a framework. This may be a blind spot of science but having a framework or theory is critical to the process-and for better or worse having one is better than having none.

But there are philosophers of science who argue that all this theory is just curve fitting … and just so stories told post hoc, full of sound and fury signifying nothing. I don’t agree with them but again that’s just my opinion.

Isn’t is amazing how a simple question leads us into the depths of philosophy of science.

Just as a side note, Darwin’s Origin of Species (maybe the most powerful example of the value a theoretical view point) ends as follows:

There is grandeur in this view of life, with its several powers, having been originally breathed into a few forms or into one; and that, whilst this planet has gone cycling on according to the fixed law of gravity, from so simple a beginning endless forms most beautiful and most wonderful have been, and are being, evolved.

There are a couple of interesting points I would like to make about this quote.

First, not many people know that the word “evolve” (or variants thereof such as “evolution,” “evolved” etc.) makes it first and ONLY appearance in the very last word of the Origin of the Species! How strange is that, given the controversy the word has caused over time and the fact that Darwin’t theory is known as the “theory of evolution.”

Second, the phrase “this view of life” (at the beginning of the quote) was taken by Stephen Jay Gould as the title of a series of essays he wrote in Natural History magazine. I read these essays when I was growing up in India and they not just influenced my thinking about science and evolution but also informed my writing style. Gould became my inspiration and I aspired to write like him. For this reason I was quite deliberate in ending the TCRecord piece with the words “one such view”—a subtle homage to two of my heroes—Charles Darwin and Stephen Jay Gould.