This is an extended piece on the manner in which the web, small pieces loosely joined, can lead to “serendipitous connectabilty” (something I had written about earlier here). All this is situated in a story that connects cognitive scientist Douglas Hofstader, Oriya writer and poet J. P. Das, and the father of non-violence Mahatma Gandhi. This is an interesting story in and of itself, and along the way offers some insights into the nature of the Internet and the psychology of creativity. Quite a lot to fit into on posting but bear with me.

Ambigrams are words written in such a way that they can be read in multiple ways (by rotation, reflection, and so on). You can find lots of examples on my site by going here, or see the ambigram for Kafka below. The person who got me into ambigrams was Douglas Hofstadter (incidentally the person who coined the term). I remember seeing ambigrams for the first time in his collection of essays Metamagical Themas and marveling at this this form of tightly constrained creativity. Many years later, when a graduate student in Mumbai, I came across Scott Kim’s book Inversions and was reintroduced to them, though I never thought that I could create anything like them. It was a few years after that, when I have moved on to graduate school in Urbana-Champaign, during a statistics class, that I created my first ambigram. And then the flood-gates opened. I would spend hours doodling on anything and everything I could lay my hands on, (many were created on napkins at the Greyhound station at Chicago). My early ambigrams were not very good, but with time I developed my own style, and was soon churning them out by the dozen. A few years later, while working at NCSA (the home of the first browser, Mosaic) I created my first website devoted to ambigrams. The high point was an email from the master Scott Kim himself, which led to a meeting with Doug Hofstadter! But that is a story for another day.

One of the ambigrams I had created was for the word “Oriya” (my mother tongue and the language spoken by people in the Indian state of Orissa). This reflection ambigram is one of my better efforts, if I say so myself. It captures in its symmetry some aspects of the image of the Indian god Jaganath – something I tried to highlight by placing dots in the middle of the two circles. This ambigram sat on my website along with a bunch of others I had created, nothing really drawing attention to it.

A couple of years ago, out of the blue, I received an email from someone named J. P. Das. He introduced himself to me, as an Oriya poet who was visiting Chicago and had, during his web-browsings had come across my ambigram for “Oriya.” He was drawn to the design, and recognized the connection to Jaganath, and complimented me on its design. [You can find out more about Mr. Das’ extensive accomplishments here and here.]

I immediately recognized his name and wrote back to him, telling him about my mother (an Oriya writer herself) and my grandfather Dr. Tripathy a renowned philologist (now no more), wondering if he knew them. To my surprise and pleasure it turned out that, not only did he know them, he had also been to college with my father back in the 1950’s. We exchanged a few emails and the conversation, as it usually happens, essentially petered out. And it stayed that way for a few years… till a couple of weeks ago.

On January 30 (turns out to be an important date, as I shall explain below) of this year I received an note from Mr. Das telling me that he had been reminded of me and my ambigrams, by reading something in a book written by a friend of his. This book was an autobiography of a retired bureaucrat, Mr. V. P. Sawhney, titled, “Legacy to Bureaucracy: Musings of an Indian Civil Servant.” In this book, Mr. Sawhney wrote about someone who had tried to sign his name such that it could be read in English AND in Hindi. Mr. Das knew of my attempts at creating similar ambigrams and suspected (rightly) that I would be interested in seeing more examples of this nature.

And who was this person, who had tried to write his name in this bi-lingual way? The answer blew me away. This is what Mr. Das wrote in his email:

I was pleasantly surprised to come across a reference that at least one person thought of signing his name in such a way that it could be read both in Devnagari and in English. The first letter he wrote looked both like an English M and the Hindi MO; K and Gandhi similarly followed. It was of course typical of Gandhi to be so playful!

I could hardly believe my eyes. Gandhi! The idea that Mahatma Gandhi had tried to create ambigrams, just blew me away. How incredibly cool was that! This I had to see, and Mr. Das obliged. Within a week I had in my inbox a scanned PDF of the two key pages. You can see the complete PDF here (and I really recommend downloading and reading it), and the signature is given below. [The quality is not great but that’s the best I have.] 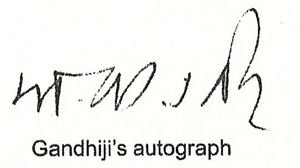 To find out that Gandhi, THE Gandhi, had been spending time trying to think of writing his name bi-lingually was just amazing. I had always had a great respect for Gandhi, though he seems to be somewhat out of favor in today’s India and to find this connection between us touched me. Strongly.

If you read the PDF you realize that the young Mr. Sawhney had met Gandhi sometime around November 1947 – a few months after India’s independence, and the tragedy of partition, and a less than two months before Gandhi’s assassination. And the date of the assassination: January 30, 1948! Note the date… January 30! It was exactly 61 years, to the day, from Gandhi’s assassination that I had received the note from Mr. Das letting me know about this aspect of Gandhi’s life!

This is an amazing story in and of itself but there a couple of interesting aspects to this that I would like to point out. The first has to do with the nature of the web and the second about the nature of creativity.

First, what does this tell us about the web. A few years ago David Weinberger wrote a book titled Small pieces loosely connected: A unified theory of the web. In this book he argued (and I quote from a Salon.com review of the book) that:

That most of what’s on the Web is there because someone is interested in it, cares about it passionately enough to put it in front of the rest of the world…. it’s a social commons on which the interests of a mass of individuals are splayed in universally accessible detail and trumpeted in an effectively infinite array of personal voices.

This idea of people putting things out there, not because they seek to make money but rather because they want to share their knowledge, their skills, their interests, and that what they put out there is immediately and widely accessible is what makes the web so interesting. If I hadn’t put my ambigrams out there I would not have gotten to know Scott Kim or Doug Hofstadter or found out from Mr. Das that Gandhi liked to play with ambigrams as well! None of this would have been possible without the web and the Internet. This is what I have called serendipitous connectabilty), the fact that chance connections can occur, and in fact given the growh of the web, that chance connections MUST occur.

Second, about creativity. Root and Michele Bernstein have argued (most clearly in their book Sparks of Creativity) that creative people are not just creative in one area. They share a playful attitude and world-view as it were that seeks to play with everything. This does not mean that they are excellent in all that they do – but rather that it is this playful nature (across domains) that makes them successful in the area they specialize in.

Think back for a moment about the time Gandhi scribbling his ambigrammatic signature. The historical record shows that Gandhi took no joy from Indian independence. The partition of India had dealt him a body blow. It repudiated everything he had ever stood for. By all accounts he was a shattered man. And yet, despite all that, even while meeting future presidents and politicians, even while thinking of what he could do next to repair some of the fissures and ruptures that that torn the sub-continent apart, he found time (and surely a little pleasure) in trying a different way of signing his name.

[The idea of small pieces loosely connected fits with my relationship with Michele and Root Bernstein as well, since I got to know them, not because we are at the same university, but rather when I found out that their book had been plagiarized extensively by someone called Dr. David Jiles. You can read about that entire saga here.]

So what a long way we have come, from finding ambigrams in MetaMagical Themas to finding out that Mahatma Gandhi was quite possible the first Indian ambigrammist and receiving some wisdom about the nature of the web and creativity.