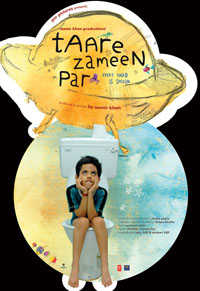 Taare Zameen Par (loosely translated as “Stars on the earth”) is a new movie produced and directed by Aamir Khan, one of Bollywood’s biggest stars. He also acts in it. What is unique about this movie is that despite its Bollywood trappings, it is a somewhat serious take on education in India. Through its story of a creative but dyslexic boy struggling to survive in school, TZP makes a heartfelt argument for going beyond tests and typical academic knowledge.

The first half of the movie is excellent, imaginatively directed, with impressive performances from a relatively unknown cast, complemented by some of the most creative animation to come out of Indian cinema in a long time. The child actor, in his first screen appearance, is just absolutely amazing.

The second half of the movie is more conventional and predictable, choosing to offer simple solutions — that often emerge in typical Bollywood fashion, through song and dance. In doing so, the movie does disservice both to the seriousness of dislexia and, cinematically speaking, with the high standards set during the first half of the move. This could have been a great film.

Speaking of songs, it is not that all the songs in the movie are bad or wrong. The first part of the movie has a couple of song sequences that are wonderfully shot and do not distract from the story, in fact they complement it. Here is one such song:

One has to give some credit though, to the star Aamir Khan for taking on such an un-sexy topic. No guns, no discos, no over the top melodrama. Over the past few years, Aamir Khan has been on some kind of a mission, trying to create a kind of socially conscious cinema, and using his star-power to muscle it into the box office. The tragedy is that these best of intentions are often subverted by the genre conventions of Bollywood, and his unwillingness to depart too much from it.

As an educator, and professor of educational psychology, it has been interesting to follow some of the media interviews Aamir Khan has been giving as a part of the publicity campaign for TZP. See this interview below where he seems to be channeling (in some kind of pop psychological way) the multiple intelligences ideas of Howard Gardner. I do not mean to simply make fun of this, because, clearly his heart is in the right place, and more importantly, given the sorry state of most Indian education, these are ideas that need to be heard.