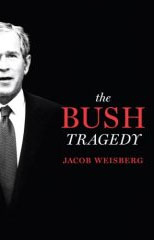 I picked up Jacob Weisberg’s The Bush Tragedy from the library and finished reading it over the past day and a half. I have never been a fan of Bush, mainly because I was troubled, from the very beginning, by his lack of curiosity, and his unwillingness to learn. Weisberg has been a somewhat moderate fan of Bush, though he is now quite disappointed with what has happened in the past seven years. This book is his attempt to understand what went wrong and why.

There isn’t really much new in this book if you have been following the news and the series of books that have analyzed Bush’s presidency. What is different in this book, according to Weisberg this the attention he pays to this “black box” around the Bush presidency. This box is “filled with a series of relationships–familial, personal, religious, and historical.” Weisberg attempts a psychological portrait of Bush and argues that “the Bush Tragedy is that the son’s ungovernable relationship with his father ended up governing all of us.” This somewhat simplistic (and Freudian) summary does not do justice to the book — which is more sophisticated and complicated than that. The book is structured, chapter by chapter, around his description and analysis of a range of relationships that Bush has had, relationships with parents, siblings, friends, religion, mentors and colleagues. And though I am not sure I completely buy this framework, Weisberg has written an thoughtful book that brings together the various threads of Bush’s life (and of people around him) to help us understand this long national nightmare. The chapter on Bush’s religious beliefs and faith was the most revealing of all, and helped me realize that the stereotype of Bush as this faith driven person may not reflect his true beliefs.

The sad truth that stands out after reading this book is that, “being president was something beyond Bush’s capacities in a way he didn’t recognize” and that it was this lack of self-knowledge, combined with a deeply repressed anger, that lies at the root of this tragedy. Oscar Wilde said, “There are only two tragedies in life: one is not getting what one wants, and the other is getting it.” It appears that it may have been much better for America and the world if it were the former that happened rather than the latter.